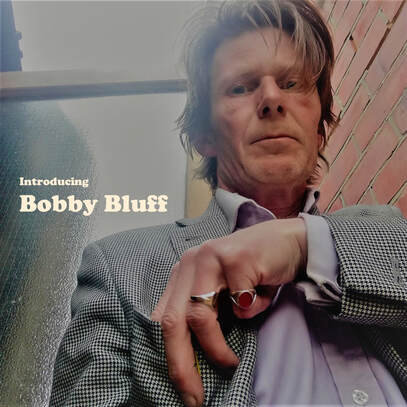 NEWS
Album out c. April 2022.
London Bridge and Who Comes videos below.

Recording during the second lockdown in Laugharne and Hastings
Bobby Bluff are Matt Armstrong, Jude Montague and Jon Tregenna
Produced by Jon Tregenna

Singer Matt Armstrong is a founder member of Kenny Process Team - ‘Your band are the classiest and most original band in the UK. Fact!' - Roddy Skeaping.  Matt is also bass player for Bill Fay.

Jude Montague, ‘creates poetry which finds the humanity amid the horror of our times' – Bill Neely ITN/NBC. Jon Snow - 'Jude Montague has gone where I've never seen a jobbing journalist tread before.'

“Now look, sit down coz I need to tell you that the Bobby Bluff record is amazing. I don't know how you did it, but it’s blown me away.”
Eugene Coyne

“I have to say… I did love that. Fabulous.”
Dexter Bentley, Resonance FM

“Imagine Bertholdt Brecht, David Bowie about to book his ticket to Berlin and John Otway had kittens and puppies, and that those hellspawn then interbred incestuously - their progeny would probably sound like "Introducing Bobby Bluff", but with the passionate intensity toned down. I can think of no higher praise than that. Brilliant stuff.”
Martin Rowson

“Is it too early to say you’ve found the best album of 2022? Bobby Bluff is a raucous slice of East-End storytelling set to sweet sweet music."
Mike Kennedy SWND Magazine