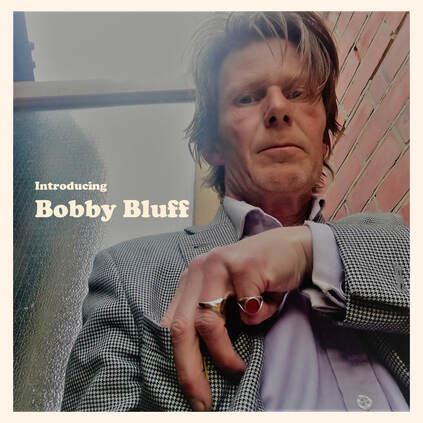 ​Follow on Facebook here, or Twitter here.
More info below.
REVIEWS
"Truthful tunes rooted in real life. Songs that swagger out the speakers, smack you round the ears, then leg it before you even register what hit you. Music that leaves you reaching for the replay button.“
Tom Robinson, BBC6 Music

"I've spent the morning listening to the album. Boy, that's pretty striking stuff. Loved the trumpets!! The lyrics and arrangements made me think of a heavier Decemberists. The Crane Wife, particularly. The video was pretty cool, too. Anyway, congratulations."
Allan Jones, ex-editor of Uncut and Melody Maker

‘The Cat of Cruickshank is elevated in its Avant-Garde style and as rough as the plot to a Ken Loach film. Coming across it almost felt like an act of serendipity in our dystopic world-weary times. The Cat of Cruickshank leaves you with that rare sense of eagerness to find out where Bluff will take his innovation next. Even if the rest of 2022 disappoints, you can place your faith in the stout-hearted ingenuity of Bluff.’
ANR Factory
LINK

'This is probably stretching the definition of a ‘Welsh release’ past its limit but what are you going to do, write to your MP? Bobby Bluff is a band of three, none of them named Bobby Bluff: our connection, if you will, is Jon Tregenna, a Welsh playwright/writer/muso resident in Laugharne where Introducing Bobby Bluff was partly recorded. The other two members, Matt Armstrong and Jude Montague, have done some interesting stuff together and separately; Armstrong affects what I assume is the character of Bobby through his London wideboy vocal and lurid underbelly-of-the-city lyrics. Musically this is oddly tricky to pin down: there are dustings of electric folk and jazz, and I catch Ian Dury and Auteurs vibes at times, but it’s all pleasingly vivid and theatrical in the good sense.'
Buzz Magazine
LINK

Singer Matt Armstrong is a founder member of Kenny Process Team - ‘Your band are the classiest and most original band in the UK. Fact!' - Roddy Skeaping.  Matt is also bass player for Bill Fay.

Jude Montague, ‘creates poetry which finds the humanity amid the horror of our times' – Bill Neely ITN/NBC. Jon Snow - 'Jude Montague has gone where I've never seen a jobbing journalist tread before.'

“Love the Taboo/Peaky Blinders tip. Bobby Bluff channels the sound of chancers from England’s future past and present.”  Felix Macintosh

“Now look, sit down coz I need to tell you that the Bobby Bluff record is amazing.
I don't know how you did it, but it’s blown me away.”
Eugene Coyne

“I have to say… I did love that. Fabulous.”
Dexter Bentley, Resonance FM

“Imagine Bertholdt Brecht, David Bowie about to book his ticket to Berlin and John Otway had kittens and puppies, and that those hellspawn then interbred incestuously - their progeny would probably sound like "Introducing Bobby Bluff", but with the passionate intensity toned down. I can think of no higher praise than that. Brilliant stuff.”
Martin Rowson

“Is it too early to say you’ve found the best album of 2022? Bobby Bluff is a raucous slice of East-End storytelling set to sweet sweet music."
Mike Kennedy SWND Magazine